The 2021 NFL Draft offers a significant opportunity for football teams to make the right picks. These five teams need to embrace this opportunity.

With a 10-6 record last season and barely missing the playoffs, the Miami Dolphins can use the 2021 NFL draft to give themselves the necessary boost to beat the Buffalo Bills as the top team in the AFC East.

To achieve this, they need to bring in a wide receiver to join the likes of Fuller, Williams, and Devaney Parker. Getting a good wide receiver will boost their attack and give Tua Tagovailoa the support he needs to run a dynamic passing game.

The Cleveland Browns are in a bit of a weird spot. With the rebuilding process that has been going on for the past few years, they have to take full advantage of this opportunity to add to their team.

The Browns are not looking for a franchise savior, but with 90th and 92nd picks in round 3, round 2 being the 59th pick, and round 1 being the 26th pick, they haven’t gotten great opportunities so far. At this point, they need to spend these picks wisely on a cornerback to start opposite Denzel Ward. They also need to consider an edge player.

The 2021 NFL draft offers Washington an opportunity to control the NFC East, as they are not properly settled in the quarterback position. They need to secure an excellent quarterback to create a guaranteed long-term path towards success. One of the top five quarterback prospects would be satisfactory for the team’s needs since their present options are nothing to write home about.

Currently, Washington has Ryan Fitzpatrick, a 38-year-old journeyman, and Taylor Heinicke, a one-game wonder. Though both players have performed exceptionally in the past, they lack consistency. And this is something Washington needs to be careful of during the coming draft.

The Philadelphia Eagles have many needs in their team right now, and they have to use this draft to satisfy those needs. Some mock drafts have them picking an off-ball linebacker in the first round even though they haven’t done that since 1979.

The Eagles shouldn’t choose an off-ball linebacker. They need another wide receiver or a cornerback that will pair perfectly with their quarterback and pose a threat to their opponents’ cornerbacks.

The Pittsburgh Steelers have their work cut out for them in the 2021 NFL draft. With many essential players on expiring contracts and a small salary-cap allowance, they’re forced to make some tough decisions regarding who should stay and leave.

Pittsburgh Steelers still have a lot of positions to enhance, and if they choose carefully, they might be able to make the best out of their present situation. These positions should be of top priority- offensive tackle, linebacker, and running back.

If these teams choose carefully along these lines, they will maximally benefit from the draft.

What to Expect from the PGA Tour 2021

Best Football Players of All Time

The New England Patriots were recently the first NFL franchise to partner with crypto fan token providers, Socios, as the…
byTLS Staff 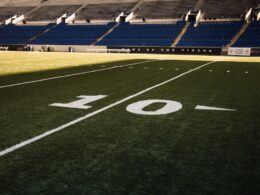 The NFL in 2021 will be dominated by Aaron Rodgers and Tom Brady, like it was in the…
byTLS Staff